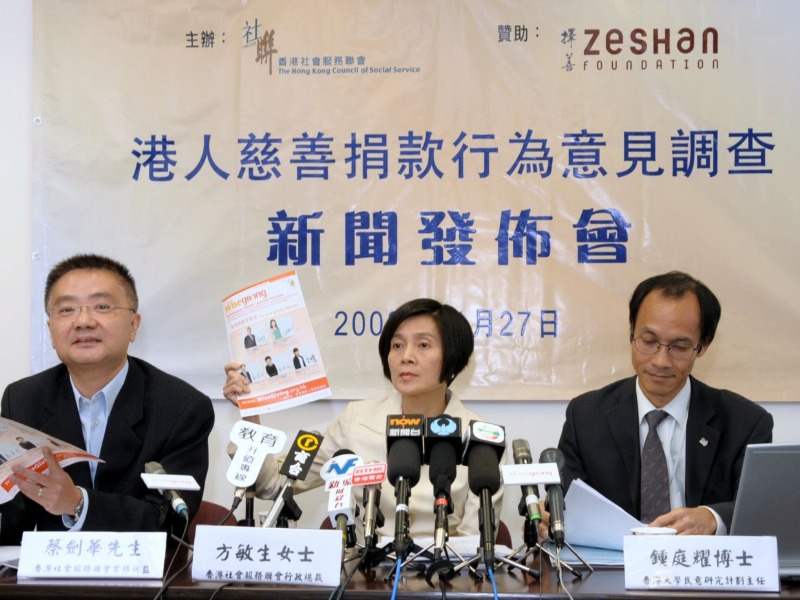 In 2007, the Hong Kong Council of Social Service (HKCSS) piloted a survey to gauge Hong Kongers’ giving behavior. A collaboration with the University of Hong Kong, the survey revealed thought-provoking ﬁndings and basically conﬁrmed what was suspected about how and why Hong Kongers donate to charitable causes.

Recognizing the instructional and informative values of such a study, ZeShan provided funding to the HKCSS for two follow-up surveys in 2008 and 2009. Such a longitudinal study provided not only additional evidence on Hong Kong people’s giving habits, but also stimulated a discussion on how citizens may be involved in their communities by taking on a more proactive approach. This study led to the creation of “Charity Savings Account” for individual donors who are only able to give a small sum at a time, and who often feel their charitable gestures may not make much of a difference. To date, HKCSS has signed on over 100 individuals who deposit into their accounts on a regular basis.

It is heartening to learn that Hong Kong citizens are extremely generous. They rise to calls to help victims of major disasters and donate to help the less fortunate in the community. Almost 90% of those surveyed made charitable donations in the survey year (2008). Close to 80% of those surveyed did not reduce their donations to local charities as a result of giving to disaster relief. It is also a strong reminder that donors care greatly about an organization’s reputation, degree of transparency and effectiveness of services rendered.